To my bit on the side…

Posted on February 9, 2013 by jasrangoon

Ten points if you can guess which of his movies inspired my choice of cake for the graphic. 😉

Between putting the Christmas decorations away, a cold and an impromptu trip to the Great Smoky Mountains I haven’t had much time for blogging the last week. Once everything was done, I got a hair brained idea to make a background for my Tumblr. If you’ve ever done this, then you know that sometimes you have to play with the html code to get things to work just right. I have no idea what I’m doing with html–or at least I didn’t before I decided to give changing the background a go–which meant lots and lots of Google searches and trial and error.

I’m happy to say that I actually figured out what I was doing! Here is what I ended up with: 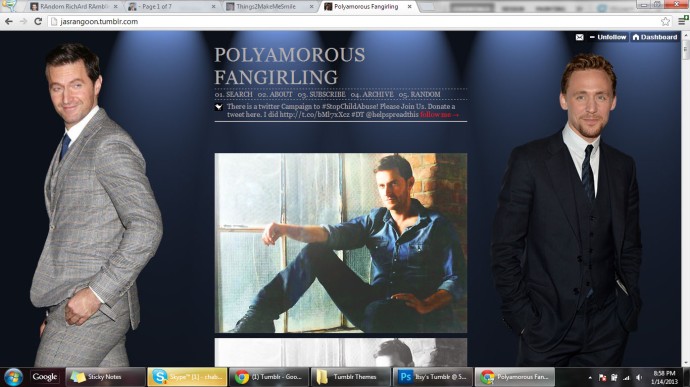 Not only did I get the background image in, I also figured out how to make said image static, so it didn’t scroll with the content! This was only the tip of the iceberg it turned out. I showed it to a few friends and ended up making backgrounds for their Tumblr’s as well AND figuring out how I needed to alter the html for the specific themes they had installed–all part of the learning process.

Here are the other three backgrounds I did: 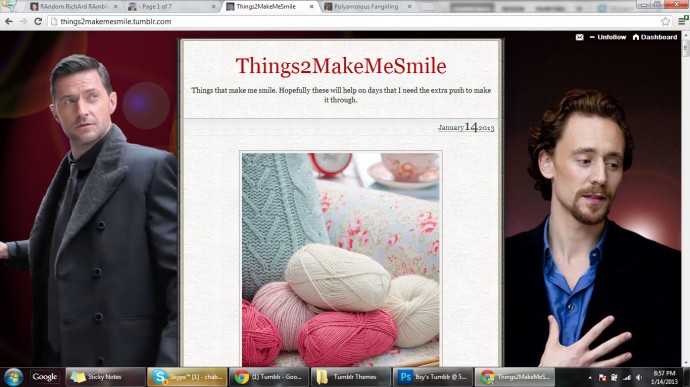 I had fun making all of these stamps to go with the Postage Tumblr theme! 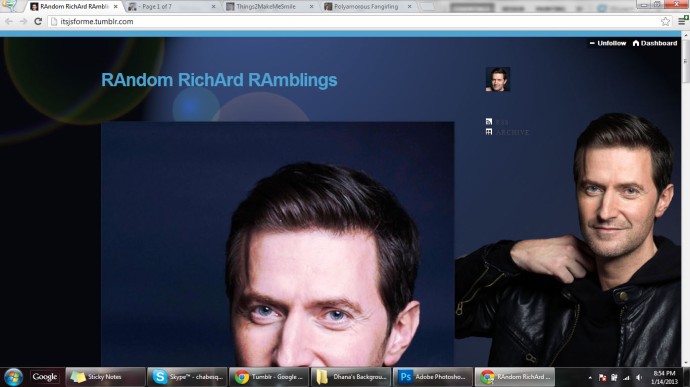 Did I mention I have a think for lens flares and lighting effects? 😉

JasRangoon: Making Tumblr a more RAvishing place, one blog at a time. 😉

The multi-actor love started with Tom Hiddleston. Richard Armitage was still my main man, but I found room in my fangirl heart for Hiddles as my bit on the side. And now–I’ve found a bit for the other side.

It all started when I finally got around to watching Once Upon a Time. See, I missed all of the hype for Once Upon a Time when it first aired. But then, thanks to Netflix I was able to have a marathon watch of the first season. I LOVED the show. I think I watched something like 3 or 4 episodes every evening until I finished it. And lucky for me, I finished just in time for the premiere of season two.

Now in this second season a new character has been introduced whom I quite like–Captain Hook, also known as Killian Jones. There’s a little something something about him. Maybe it’s the blue eyes, the smirk, the guyliner…hmmm, maybe I have a type. 😉

Or maybe I just like men in period costume tied to trees! Oh wait, that fits the same type, doesn’t it?

Whatever the case, Colin O’Donoghue is a cutie pie, makes a dashing pirate and has a killer Irish accent.

I have a big fangirl heart! There’s plenty of room alongside RA and Hiddles for another…especially on my Tumblr. 😉

If it couldn’t be Richard Armitage…

…at least it was Tom Hiddleston!

Dude’s been having a great year. First, the Glamour Magazine award and now this! Don’t get me wrong, I would have loved for it to be RA, but well…my bit on the side isn’t a bad option! 😉 And who knows, maybe next year will be Richard’s time to shine.

Are you kidding me with this?!!!

I was on Facebook a little while ago and saw where a link had been posted to vote in BBC America’s Anglo Fan Favorites: Men of 2012, Round 2. Well, naturally being the Richard Armitage fan I am, I decided I should vote. But then I clicked the link and found this image:

What are they thinking?!?! That is really the pertinent question here. Round 2 and they are pitting Richard Armitage against Tom Hiddleston! They should be in the final round against each other (or at least several rounds closer to the final one).

Okay, I’ve finished ranting now, and of course I had to vote for Richard. Hiddleston is after all just my bit on the side.

If you are interested in voting and haven’t yet done so, here is the link:

Definition:   pertaining to participation in multiple and simultaneous loving relationships

Polyamorous may not be the quite the word I’m looking for, but its close. There is a certain kind of love or maybe a better word is adoration on the part of fans to the object of their fan tendencies. At the least, we admire the person whose career we follow enough to spend time watching their work, reading or watching their interviews, looking at pictures and so on. I’ve mildly followed the careers of actors in the past, but didn’t really become a fangirl until I discovered Richard Armitage.

So why am I talking about being a polyamorous fan? Recently one of our fellow RA fans started following the career of another actor. Now, this may not effect many people, but she’s someone I’m close enough to in cyberland that I’ve been shown videos, pictures and audio clips. And now, thanks to Snicker’s mom, I’m absolutely hooked! You know you are in trouble when you are watching YouTube video after YouTube video because they make you laugh and smile. This is one is my favorites by the way! And really, how can you not like the guy when he Tweets pictures like this?

Don’t worry, Richard Armitage is still my main fangirl squeeze–but that Tom Hiddleston–he’s quickly becoming my bit on the side. I’m finding that my fangirling tendencies towards RA are now applying to TH–like watching the YouTube vids and the desire to find and watch all of his works to date. All I can say is: with a smile like this is it any wonder?