Stan Musial was one of the best baseball players of all time. He won 7 NL batting crowns, was a three time MVP, part of 3 World Series wins and made the All-Star team 24 times his 22 year career–all of which was spent with the Cardinals.

RIP Stan the Man. May your family and friends find peace and comfort during this time.

Whyyyyyyy? At least I have RA to cheer my up.

What’s a girl to do when her beloved St. Louis Cardinals blew a 3-1 lead in the series and then lost game seven as spectacularly as they did tonight?

A little bit of this:

Then add a little ice cream to the mix:

Thank goodness for RA goodies. Zan knows me so well, she sent me just the right thing to cheer me up:

You just can’t feel to terribly sad when looking at RA’s glistening torso. 😉

Best of luck to the Detroit Tigers in the World Series…seriously, kick some Giant ass.

Spring is in the air…which means baseball!

I’m taking a moment away from my usual topic to focus on one of my favorite pastimes, baseball! I love baseball. How could I not? Actually, I think there may be some kind of rule that if you are from St. Louis, you must be a baseball fan. And last season was the craziest and most amazing season I can remember…at least for a St. Louis Cardinals fan! They came from behind and won the National League wildcard slot. They played their hearts out during the post season. Game six of the world series was the most brilliant and stressful baseball game I’ve ever watched, but they won that game and the next, to become World Series Champions!

Ever since their huge win, I’ve been anxious to see how this season is going to go. The long time manager retired, and a former Cardinal has taken over as manager, his rookie season of managing. More recently we heard the news that one of our star pitchers is going to be out indefinitely, yikes. 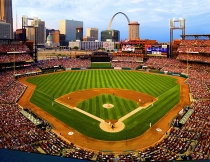 Anyway, last night was opening night of the regular season and the Cards beat the Marlins 4-1!!!! I’m hoping this is the first of many, many wins this season. What I’m most looking forward to though, is their game on Friday against the Milwaukee Brewers. There is just something about the home opener. Not just because Busch Stadium is a beautiful place with an amazing view of the city. But mainly because, even when you are just watching from the comfort of home you still feel the excitement as if you were there–looking at the stadium full of people sporting the team colors and hearing your fellow fans cheering at the top of their lungs!

Maybe, this won’t be a completely RA free post, because as I’ve been typing this a thought crossed my mind. I suspect that the rush of excitement and joy I feel when I’m in Bush Stadium surrounded by fellow fans is the same way I’d feel if I, for instance, were to attend a Hobbit premiere with fellow RA fans. I can imagine the anticipation of seeing Mr. Armitage on the red carpet being comparable to the way my heart races when the bases are loaded with 2 outs. As with baseball, I also feeling certain that everything would be intensified because of the shared experience with other fans.