I was chatting last night with another RA fan who likes to play with Photoshop as well. I was showing her an animated gif that I really liked and wanted to try to emulate. Part of me feels like I’m being a copycat. Another part of me wants to compare what I’m doing to being a tribute band.

Tribute bands do what they do because they love the bands. They love the music of a particular band so much that they give their all to sounding and performing just like their heroes. I won’t go so far as to say that various gif makers are my heroes, but I do love what they create, enough so that I want to discover how to do it myself. So I’m not going to call myself a copycat, rather I’m a tribute Photoshopper! 😉

The most recent gif that inspired my tribute Photoshopping can be found here. I couldn’t help but wonder how it was made. After some trial and error, here is what I came up with:

In case you can’t tell, I’m still stuck on those Comic Con photos and interviews! 🙂

I was trying to think of something fun to do for my 201st post and opted for a new wallpaper. Have I mentioned that I’m a tutorial junkie when it comes to Photoshop? Thank goodness for tutorials, because I wouldn’t know how to do anything with the program otherwise. 🙂

This wallpaper includes several of the images of Richard Armitage from Comic Con, which seemed like a good idea. After all, now I don’t have to flip through the images, I can just look at my laptop screen! 😉 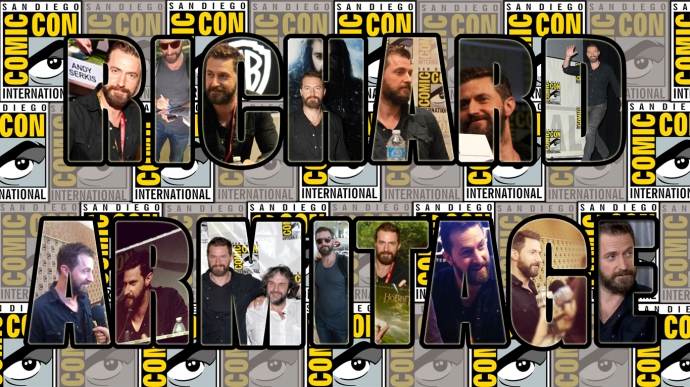 This project also helped me stay busy while I wait for news. My brother called this morning and my SIL is in labor! Can’t wait to hear that my new nephew has made his grand entrance!!!

I’m sure everyone has seen the extended HitFix interview with Richard Armitage by now. If not:

There were several nice moments in this interview. I don’t know about you, but I was glad to hear that the dwarves will be singing more than just the one song. Loved that he talked about taking pictures of the line to get into Hall H. I’m sure is was an exciting and overwhelming thing witness, so it is great that he took some photos for remembrance. I also really liked his answer about not trying to make Thorin contemporary…hello lady, this is The Hobbit!

Now, I need to be honest, I had to watch the interview a few times to actually pay attention. There was one little clip that seemed to render me stupid for a while. I’m sure you can guess, but if not, I extracted it for our listening pleasure.

Why I Love “Our Community”

I’ve mentioned on here before that I’m a fan of Firefly. You know, that little show that lasted only one season, but had such a strong fan base that they ended up making a movie as well. It isn’t just Firefly that I love, but also Dr. Horrible’s Sing-a-Long Blog and Castle. Simply, Nathan Fillion is in a lot of things that appeal to me. He also seems like a decent person from what I’ve seen and read, which makes enjoying his work all the more fulfilling.

Anyway, I was reading my latest copy of Entertainment Weekly last night and came across Nathan Fillion’s Comic-Con diary. It was fun to read about how much fun he was having and the appreciation he has for the fans. But the end of the diary entry is what really struck a chord with me. Here is what he had to say:

Now, he may have been speaking about Comic-Con specifically, but what he said is how I feel about the RA community. The people in our real lives don’t understand our fangirling tendencies toward Richard Armitage. Isn’t that why we seek out the forums, blogs, Tumblrs and chatrooms in the first place? We’re looking for a place to belong, a place where others understand. We search for a place where we can “geek out with wild abandon, to enjoy freely and without judgment.” There is a tremendous amount of “generosity of spirit” within this community as well.

Thank you Mr. Fillion for giving me the words, because these attributes of fandom are the reason I love “our community.”

Check this out soon…in case it gets taken down!

There were lots of great pictures and things today from Comic Con! But here is my favorite thing:

I also made a couple of GIFs from the EW cast interview (nothing too exciting, just moments I liked):

I came across a link to an article where someone talked about being disappointed in Sir Peter Jackson’s choice to only screen 2D, 24 fsp footage at Comic Con. While I understand the personal disappointment, (especially if said person was going to be there and was looking forward to the new format) I can’t help but think that this was a really brilliant move on PJ’s part.

We’ve already seen how people reacted to a small sampling of the footage in 3D and more frames per second. Since movies have been shown the same way for decades, it is going to take more than a few minutes for our minds to adjust to a new way of viewing movies. I expect to find it awkward for the first few minutes of viewing the movie come December, but then grow accustomed to the new format.

What does Peter Jackson want to highlight:

I decided to screen the Hobbit reel at Comic-Con in 2-D and 24 frames per second, so the focus stays firmly with the content and not the technical stuff. If people want 3-D and 48fps, that choice will be there for them in December.

Seems reasonable to me. If a new format is going to be distracting in the short term, people won’t be focused on the content. So, for preview purposes, give them a format that they won’t have to adjust too. Rather than focusing on the hyper-real quality of the footage, they can focus on the scenery, script, acting and so on. Plus, as PJ pointed out, when it comes time to see the movies in the theater people will have a choice. But at Comic Con, they get what their given. So going with the familiar format seems appropriate.

I don’t mind mentioning that usually someone videos these things and posts them to the internet for the rest of us to view. The 2D format will be beneficial for that purpose too, as those of us watching from our computers wouldn’t have the means to watch in 3D.

And because I can’t resist:

I really want one of these Thorin posters!

Someone’s feeling like a mind reader at the moment! J/K 😉

Is RA hiding out? Here’s my theory.

We’re still in the middle of the RA drought. Yes, we got a couple of glimpse of the man in the latest video blog by Sir PJ, but he didn’t talk like many of the other actors. In addition, we haven’t seen pictures of him from any of the events that other actors from the production have attended and been photographed at.

This has led me to a new theory. Not only is RA camera shy as himself, but he’s probably working some awesome disguises to stay out of the limelight. Here are a few of the disguises I think he’s probably sporting these days:

He did where that scarf so well in Strike Back, maybe he’s decided to rock a sultan’s headdress.

An oldie but a goody.

He could find a masquerade to attend with this look.

New Zealand is a couple of islands, so a pirate disguise doesn’t seem too far out.

Zorro is a man of mystery…very fitting for RA.

Maybe he’s taken this chance to revisit his CATS days.

Or maybe he’s rocking some Clark Kent style glasses. Wouldn’t that be a picture!?

Let’s just hope he isn’t in disguise for Comic Con. I have heard of celebs dressing up in disguise to wander the floor of the event. Don’t get me wrong, as fun as it would be to see him in something like this:

We want to make sure Angie recognizes him if she gets the chance to see him!