John Standring, oh how I wanted to knock some sense into you!

I finally saw Sparkhouse a few weeks ago. As usual, I was truly impressed by Richard Armitage’s performance. John Standring was such a contrast to any other character I’ve seen him play. It really is quite amazing to me that the same man who swaggered and smirked as Guy of Gisborne also gave such an engaging performance as the shy and painfully awkward John Standring.

*Ducking before even writing the rest.*

As good as he was in this role (or probably because he was so convincing in the role), most of the time I just wanted to shake John! Carol was horrible. I know that we’re supposed to feel sorry for her because of the abuse she suffered. But I just couldn’t.  Not once did I see anything worth while in her. Maybe she really did love her daughter, but she loved herself  more. She was so incredibly selfish and mean. And then of course, there was the fact that she was still in love with that tosser Andrew (does anyone understand that?). Every time I saw JS mooning over her, I genuinely wondered what was wrong with him.

Look at how sweet he is! He totally deserved better.

I know the old adage “the heart wants what it wants.” But how could someone so good want someone so horrible in the first place? I think John really did love Carol. That is the predominate reason I can see for him selling his house, putting the money into the farm, and marrying her. As I watched I couldn’t help thinking that I wished he had a true friend, someone to say, “You deserve so much better.” 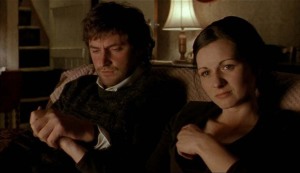 This is where I really feel the need to duck, because part of me thinks John was settling. He knew he was awkward and shy. He wasn’t exactly going to win a prize for the best chat-up lines. He was a farm hand, which probably didn’t go over so well with the ladies. And he had horrible dress sense. (Yes, I know this last one is shallow, but add it to all of the rest.) So part of me thinks that JS suspected that he was going to spend his life alone. Then out of the blue, this woman that he’s had a thing for for ages asks him to marry her. He’s not stupid, nor do I think he’s oblivious to

John confronts Carol about "making a whore of herself."

who Carol really is. He knows she’s been in prison and knows that she’s a liar. He has seen her temper. And we know he at least suspects that she still loves Andrew. He also knows that without his money she’ll lose the farm. We even know he has some doubts, because he confronts her after his argument with Andrew. I think it is possible that he saw marriage to Carol as his only chance at having a family, even if it was going to be incredibly dysfunctional.

So yes, I want to knock some sense into John Standring! Feel free to flay me in the comments section. 🙂

On a side note: I have read some Sparkhouse fanfic and I’m honestly not sure which path I prefer. There is something nice about the idea that Carol can be redeemed–that she and John can have a truly happy life together. But that doesn’t seem likely to me. I know these are fictional characters, but the stories where Carol kills herself and John meets someone new ring much more true to me.

17 thoughts on “John Standring, oh how I wanted to knock some sense into you!”